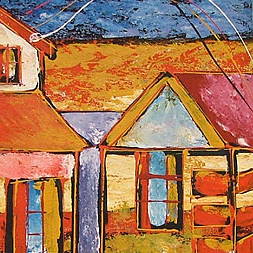 Mupedza began working in a small, postcard size format. As his skill and confidence grew, so did the size and complexity of his works. His colors are not the brights favored by most artists of Zimbabwe, but subdued hues evoking a contemplative mood.  Early subjects focused on myth and folklore as real components of religious beliefs within the traditions of Africa.  This, too, has evolved into abstracts, landscapes, and images of everyday life.

Abstract works are typically painted on a black background, creating a dreamlike quality in the work. Often, there are sprinkles of paint which may represent sounds attendant to the subject.  His style shows a freedom from restraint, a sense of letting go.

Mupedza’s paintings of everyday life typically feature women as archetypal characters of biblical demeanor. These paintings celebrate the strength of women and their traditional roles in African culture.  He sees women as both helpmate and equal counterpart, and attempts to portray this through his work.

Somewhat outside the mainstream of Zimbabwean painters, Mupedza sees life both in terms of history and contemporary reality. His studio is in the rural area of Domboshava, where he finds inspiration from the people and landscape.  Since 1997, Mupedza has received numerous commissions for new works.   His works are also included in many private collections in Zimbabwe, South Africa, The Netherlands, Belgium, Australia, Switzerland, England, France, The United Kingdom, Canada, Germany and The United States.