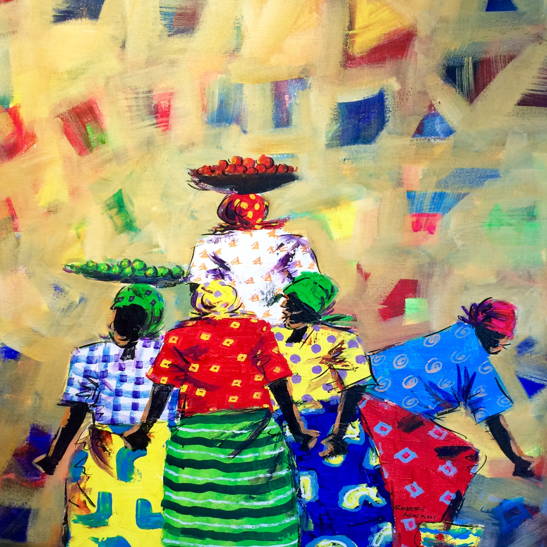 Robert Aswani was born in Western Province, Kenya in 1971, and grew up in a rural part of Western Kenya known as Luanda.   A self-taught artist, he has enjoyed painting ever since he was young, and remembers drawing diagrams on the blackboard at the request of his teachers who recognized his skills.  He completed his education at Ebunangwe Secondary School in Vihiga.

While growing up as a kid he says he loved going to the market with his mother just to get the excitement of seeing many people gathered together. These rural and informal marketplaces were an early inspiration for him. “The marketplace is full of life, color, and the closeness of people”, says Aswani, “The intermingling of people in these informal places provides me with the excitement to paint”. The market scenes he paints today are a true reflection of the market places in his rural home in Western Kenya.

After his high school education, Aswani went to Nairobi to live with his aunt. Luckily there was a neighbor who was an artist, so he received informal lessons in the evenings. Being mostly self-taught, Aswani loves to experiment with many painting styles and media including oils, acrylics and watercolors on paper or canvas.

In January 2000, he spent a few days in a Maasai manyatta, which inspired him to make impressions of Maasai and their village life using the red which the Maasai people use often to dye their cloth. “It is through color that he expresses his feelings toward the Maasai people.”
His love for the sea and coastal life is apparent in his seascapes. Aswani particularly enjoys capturing sunset and sunrise, which reflect the true African experience. Aswani currently lives in Nairobi, where he has made painting his full-time occupation since 1991.